The ONE HOPE by Susan Mathews

“No hope.” Those are the two words I distinctly remember from that day in March 2000. My husband Santhosh and I, along with my parents and brother were shocked to hear that our first baby had no chance at life due to the multiple birth defects found on the ultrasound. “We like to see perfect pictures, but these are not perfect,” explained the on-call obstetrician who reviewed the ultrasound results. She made arrangements for us to see the perinatologist immediately to clarify the ultrasound. As my family rushed to the specialist’s office, I couldn’t help but wonder about our baby’s future. I was working as a nursing assistant and finishing my last semester in nursing school. I knew the road ahead for a baby with a cleft lip and palate would not be easy.
The specialist confirmed what my obstetrician saw in our first ultrasound. Our baby had 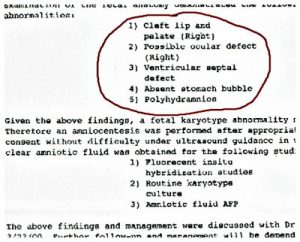 a cleft lip, cleft palate, and a ventricular septal defect. However, it was what he could not find that concerned him. He could not find the baby’s stomach. While there could be multiple reasons for the absent stomach, the most likely diagnosis was a diaphragmatic hernia. Basically, the stomach was trapped in the lung cavity, which wouldn’t allow the lungs to develop and function at the time of birth.
“There is no hope that this baby will live.” According to our specialist, with all the birth defects, the best medical option was an abortion.

Shock, grief, disbelief and so many questions flooded our minds as we left the office. After we reached home, our pastor, V.P. Abraham, gathered with us to pray. As we wept before the Lord, God gave Pastor Abraham a word from Jeremiah 18:3-4:

“Then I went down to the potter’s house, and, behold, he wrought a work on the wheels. And the vessel that he made of clay was marred in the hand of the potter: so he made it again another vessel, as seemed good to the potter to make it. “

The verse was a beautiful illustration of the miracle we believed would take place for our baby. Even though the potter’s vessel was marred, he did not discard it, but used the same clay to make another vessel. We put our trust in God and His Word. The Bible says that Jesus Christ not only died for our sins, but also for our sickness and diseases. His sufferings on the cross and His resurrection not only ensured eternal life for those who believed on him, but also clearly shows that by His stripes, we were (already) healed! We started to pray to the Father in Heaven in the name of Jesus Christ in the Holy Spirit!

The news of the poor prognosis for our baby spread to our relatives and friends throughout the world. People were praying for us. The following weekend was our annual church revival meeting. The visiting minister, Pastor Vaidyan, called Santhosh and myself up to the front of the church for prayer. As Santhosh placed his hands on my stomach, the whole assembly began to intercede for us. Later, Santhosh said he felt fire in his hands. We believed that God was healing our baby.

The following week, we were sent to a pediatric cardiologist so that an echocardiogram could be done to check the baby’s heart. He confirmed that there was one large hole in the heart wall; plus, there were many smaller holes, he could not count them. Sometimes the holes will close on their own, he advised. However, open heart surgery may be performed based on the baby’s health at delivery. Honestly, after we left his office, I was a little stunned. I thought our baby was healed when we believed in the Word and after the revival meetings. But then it was as if God put the song “Whose report will you believe, we shall believe the reports of the Lord!” into my heart. I encouraged Santhosh and myself with the song. God would heal our baby! All of our doctors met with us to review all the test results the next week. They could not find any genetic reason to indicate a cause for our baby’s birth defects. “It’s a one in a million fluke.” The specialist then began the follow-up ultrasound. He shook his head while staring at the screen, which frightened us. Then he said, “There’s the stomach! This baby has a chance for life; all the other defects are surgically correctable.” We gave all praise and thanks to God for His answer to prayer and great faithfulness. 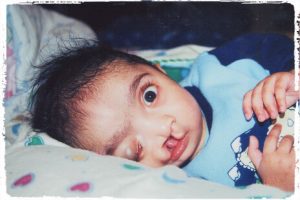 On July 27, 2000, Philip Santhosh Mathews was born. Born alive! They brought him to me briefly after his birth, and he just stared quietly at me with one eye wide open, as if saying “Thank you, mommy, for life! I had prayed for a miraculous healing for Philip’s cleft lip and palate, but that was not God’s plan. In fact, the initial CT scans of Philip showed that he did not have a right eye or ear. In place of his right eye was a large cyst that was covered by his eyelid. In place of his right ear was a tiny skin tag. His jaw on the right side was also smaller than the left. It was as if the right side of his face did not develop. The corpus callosum of his brain was also missing. They later identified the syndrome as Goldenhar Syndrome. Infants born with this syndrome may have seizures and be mentally and developmentally delayed. We had many questions, and very few answers. I remember lying in the hospital bed those first few days after delivery, worrying about what new information or “wrong thing” they would find today with my baby. I felt hopeless. 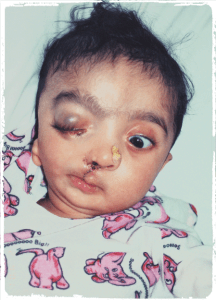 I could not nurse Philip, and because of the strain put on his heart to use his special bottles, he began to lose weight. We found that when Philip was nourished with a G-tube that traveled from his nose to his stomach, his weight began to stabilize. He tolerated the feeding tube; therefore, a gastric tube was placed in his belly at two weeks of age. Because his heart was working so hard, he was placed on various heart medications. He was released from the neonatal intensive care unit at one month of age. After we brought Philip home, he had to see one of his seven doctors at least once a week. The cardiologist would get chest x-rays every one to two weeks. Finally, in October he told us, “Whatever you all are doing, keep doing it. His heart is getting back to normal size.” Praise God, all we were doing was praying! Genesis 18:14 says “Is there anything too hard for the Lord?” The following March he was weaned off his heart medications, because the holes in his heart had closed up on their own.
We were not able to schedule Philip’s cleft lip repair, until cleared by the cardiologist. 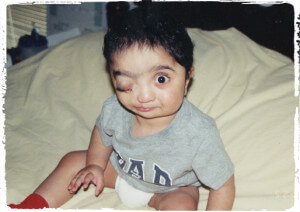 This finally happened in January 2001. Philip went on to have his cleft palate repair, a tube placed in his left ear for frequent ear infections, right ear tag removed, right eye cyst removed, and right jaw extended all since 2001.

In September 2001 he received clearance to begin eating food by mouth; yet he was scared of anything being around his mouth. I was so anxious to cook for him or buy him a Happy Meal! In God’s own time, at 1 ½ years of age he finally started to eat by mouth. 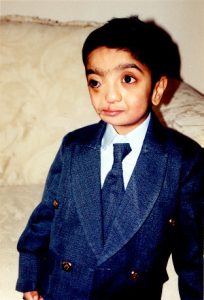 has been followed by a spine surgeon. The plan initially was to keep Philip in a brace to slow the progression of the curve. In spite of the brace, his curve has worsened to 90 degrees measurement. Even if our spine surgeon fused Philip’s back, he told us his back would never be straight. But I serve the Great Physician who says that the things that are impossible with man are possible with God! We are praying for a miraculous deliverance and healing for Philip’s spine.
Developmentally, when I think about where Philip is now and where he was after birth, I cannot help but give thanks to God. Because of his oral surgeries, Philip had more difficulty putting sounds together and communicating. He attended Siskin Children’s Institute where the speech therapists taught us all sign language. Again, in God’s own time, he finally began to speak fluently by age three.

Philip used to be so fearful of unfamiliar faces or even unfamiliar toys. Over time, he transformed into the social butterfly he is today. No one is a stranger to him, he only meets friends. 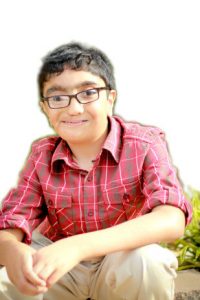 In spite of hardships he has endured, God has given him a heart to trust Him. In April 2009, he asked Jesus to come into his heart and be his Savior. In his childlike faith, he has inspired and strengthened and blessed us. He was advised by some new friends of mine to begin to pray for his own health and healing. My friend said, “Philip, you must pray that God heal the right side of your face and make it like the left side.” Philip’s response? “I am praying for God to heal me, but sometimes He tells me I have to wait.”

The Word tells us that Jesus is the same yesterday, today and forever. I know that the God who created a stomach, where there was no stomach can in the same way straighten the spine that is curved. He alone can change the hopeless situations and turn it into one full of hope. He is the God of all hope.

Philip finished his earthly journey on October 22, 2019 after 19 incredible years on this earth. He went through 25 surgeries and passed away after his 25th surgery. He lived a full life and never wasted a moment! His motto was that he would work “Until the World is Cleft-Free” and “Until there are No More Sold!”

We as his parents and his siblings have decided that we will honor his legacy and work until #PhilipsDream is fulfilled. 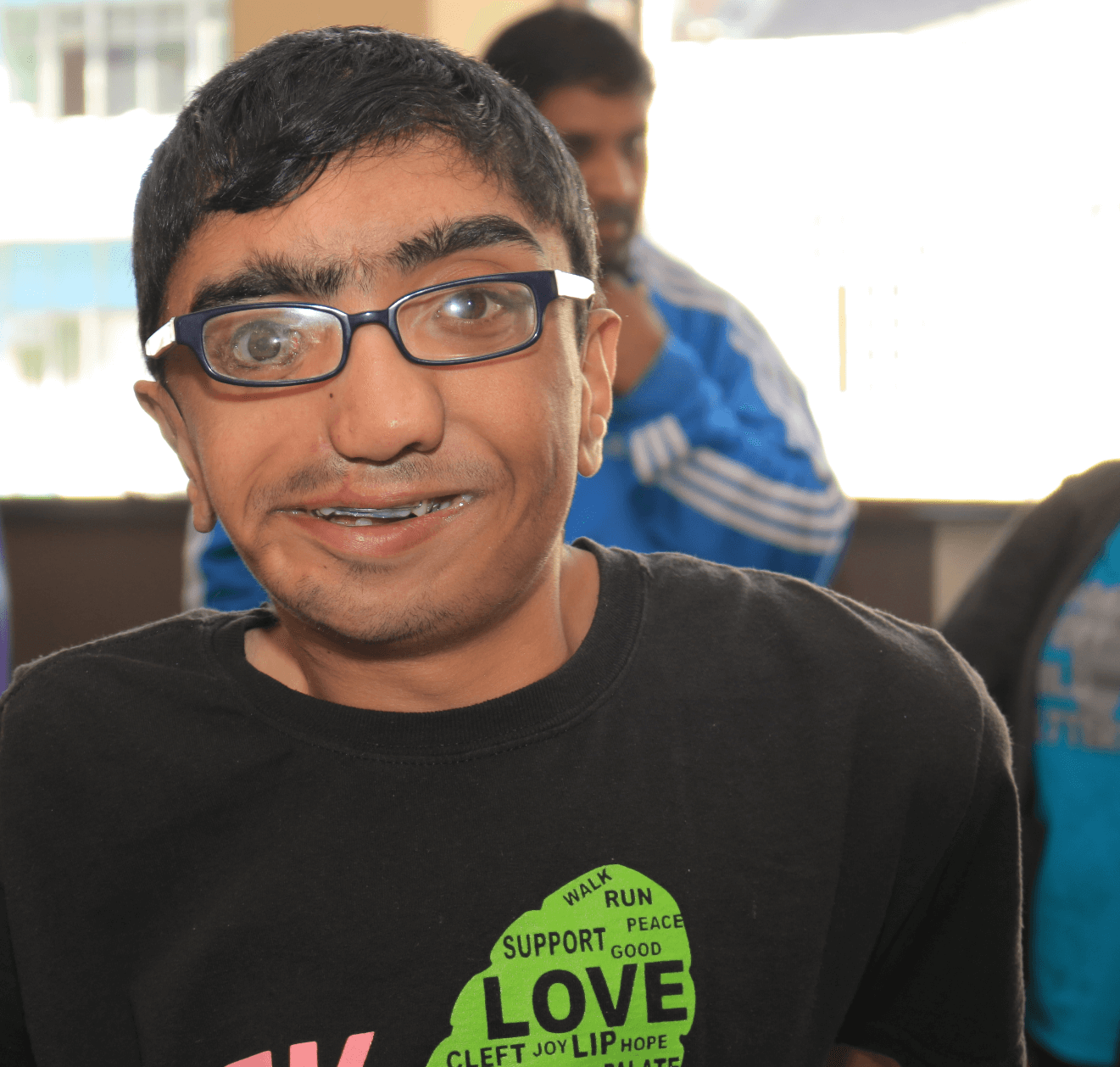 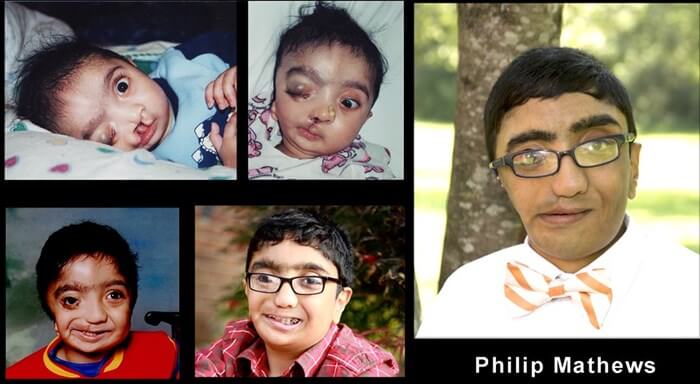